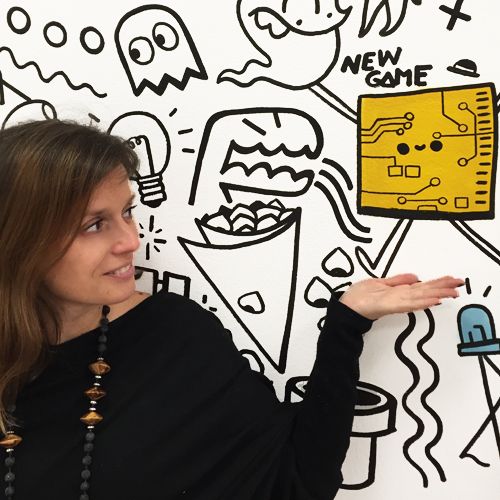 Arancha Riestra defines herself as a dreamer with her feet on the ground, someone who has always wanted to live outside her comfort zone, who tries to contribute to the team and to society without forgetting personal growth. Passionate about travel and design, she has always surround herself with situations, experiences and people that inspire her. Although she is an architect, she believes that “a profession does not define you, it is the label with which we identify ourselves in society to simplify it, but it does not really define me as a person. I identify much more with the label of designer because design is my vocation.”

“We discovered coworking by chance. In 2016 we were returning home after spending a few years working abroad and we wanted to create something that we had seen but that didn’t exist in Spain: an ecosystem of people focused on blockchain technology.”

Coworking was, in a way the, excuse, because I believed, and still believe, that networking and community must be face to face, in person. That’s why it was essential to have a physical space.

“We believed that coworking was the perfect vehicle to develop a community of this type, in general the tech profiles are used to telecommuting and are usually not very social and rather introverted. They have different needs than other professionals. That’s why we believed that coworking was the best option to create a hub where people could be in contact with each other, get to know each other and help each other. It had to be more than just a place to go to work.”

And so Go Madrid was born, a technological ecosystem focused on blockchain in the heart of Madrid. The percentage of people who were not from the sector, Arancha tells us, was very small: people who were just looking for a place to work had cheaper options around.

Go Madrid was the dream of entrepreneurs returning to their country searching for a community of people with interests similar to their own. To achieve this, they started holding an average of three events per week.

“Our events were always free, for the attendee and for the speakers. We didn’t charge the attendees and we didn’t pay the speakers either. What we aimed to do was evangelize about the technology we needed. In fact, we had four branches of events focused on the topics that interested the people we wanted to attract and in two years more than two thousand people passed through the space.”

We managed to create the ecosystem but we never planned Go Madrid 100% as a coworking space. That was, perhaps, our failure.

I couldn’t help but ask more about this spontaneous display of sincerity and humility: “if you set up a coworking space you have to focus on setting it up and we prioritized the ecosystem. If a person came to the space, was interesting for the project, contributed to the community and had a personal situation that did not allow them to afford the costs, they got in for free. Although sometimes that person attracted other people, this obviously hurt the coworking business.”

We were never in the red but if we had focused we would have scaled much sooner.

In February 2020, Go Madrid was at perhaps the sweetest moment in its history. They had to let a team of twenty people leave because they had no space—even though they were planning to double their space by expanding to the floor above, which was to be inaugurated at almost 100% full capacity.

“And then came COVID-19. We couldn’t open but we couldn’t close either because we were the headquarters of the companies that worked from there, and we couldn’t do a temporary employment regulation file [in which employees are able to go on unemployment while keeping their jobs] either. It was very sad.”

Although some of the members tried to offer support, their help was not enough; as in so many other cases they relied on the goodwill of their landlord because the rent was no longer feasible.

“We talked to Allianz Seguros [the building owners] and offered them different options to try to deal with the situation and, given that we were planning to expand, we thought we could find an agreement that would work for both of us.” The response they received from the landlord was that ‘Allianz needs the full rent to survive.’ “What is clear to us,” Arancha continues, “is that we proposed different solutions but they refused to budge, to the point that we had to close in July as they would not let us terminate the contract earlier. It was a situation in which the big fish ate the small fish. And the ones who bore the brunt of this harm were not large companies but an ecosystem of entrepreneurs and I do not quite understand what they gained because that space will now remain empty for many years.”

This, however, is not a story with a sad ending: I have always believed that the coworking sector employs incredible people, but it is also true that historically it has certain problems of talent retention. I think Arancha’s story illustrates this situation, which has been going on for years but which we talk about very little.

The project that now occupies Arancha’s mind and soul is Toqio. Arancha has taken the skills she developed at Go Madrid as well as from she was when she was managing people who built the buildings she designed as an architect.

“I work with people, I create a team with different skills, different perceptions, and backgrounds and then I get them to work together. I can mix everything I’ve learned in coworking and design the environment and control the situations to make people feel good. The truth is that it has not been easy because I am very passionate and this for example when I worked in the UK brought me problems.”

But what does Arancha think of coworking now that she has taken a certain distance?

“Coworking has taken a beaten in our country, the industry has not received any kind of help and I think coworking has done a good job, especially in 2020, of making conditions more flexible and helping their members and newcomers. There is still a lot of work to be done, and although I would not like to offend anyone I think that coworking operators are not analyzing remote working objectively: it does not mean working less or worse. I think this kind of discourse indicates that they are more concerned about short-term benefits than reinventing themselves and it seems to me something essential in a future that will be different from what we have lived.”

However, the future looks good.

“I have invested in coliving and I still believe in coworking as I understood it: that it is not a business center. I still believe in niche, specialized coworking. I believe that coworking spaces with focus are essential and will continue to be successful and putting out an omelet at 11 o’clock does not focus you: you need to create an ecosystem.”

But all this: What happened to Go Madrid? “Go Madrid is not over: [our time in] coworking is over. We created an ecosystem that is still there and can be reactivated in one way or another when this [COVID-19] passes and people feel the need to do a digital detox we can get together again and re-create community, have a coffee, and laugh together again.”

But why haven’t they migrated to digital when they were clearly capable of doing so? The truth is that the answer is simple: “I don't believe in online events. I believe in online education, you can do a training and learn, but you can’t network with people you don't know.”

And while this happens, Arancha is now a member of another coworking space from which she can continue to be a part of coworking and see the industry from another side.