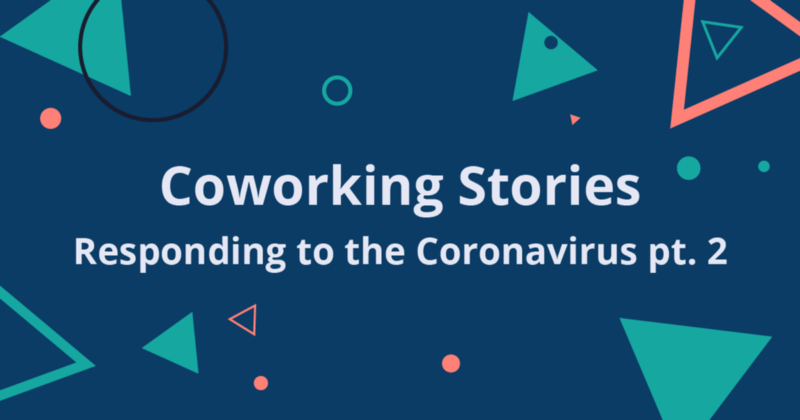 The ongoing coronavirus pandemic has affected nearly every industry. How is this new reality affecting coworking spaces? We reached out to coworking experts and spaces from around the world to see how they’re responding — and how they’re moving forward.

I know that many people are concerned about losing members, losing revenue, going deep into debt, or never being able to re-open.

These fears are real. I don’t want to dismiss them.

But as one of my teammates said this week: “Lives can be rebuilt, but only if we save them first.”

Indy Hall has been closed since Monday of this week and moved 100% of our attention to supporting our community online. I’m aggressively urging every coworking space and flex space operator to take similar actions immediately.

We’re not doing this flippantly and I don’t expect you to either. Your execution needs to be strategic and carefully communicated. With the wrong frame of mind, you probably will go out of business.

But with the right strategy and mindset, you and I both stand a fair chance of opening our coworking spaces again in the future, and having enough members still alive to come back.

I’d even be willing to bet that it makes your community stronger along the way.

If you’d like to hear more about what Alex Hillman and Indy Hall are doing in response to the coronavirus, you can watch a video recording of an event on the subject of how to close temporarily and stay in business.

Since the crisis of COVID-19 began, every coworking space in the world has been wondering how to best overcome crises that change practically daily. In the case of Spain, one of the tools that is working very well is sharing experiences and resources of each coworking space in the WhatsApp group of the Coworking Spain Conference (CWSC). Earlier this week Ben Kolp shared how The Living Room Coworking (TLR) has prepared for April.

The first news that touched us closely was when the Wuhan soccer team came to train 50km away from Malaga. From there I think the turning point for me was when the situation started to get complicated in Madrid and the closing of the schools began to be discussed — that moment was when I started to worry.

Afterwards, our members began to ask us if we could have hydroalcoholic gel, they worried about the frequency of cleaning, the disinfection of the tables, etc. At that time, apart from taking the necessary measures to minimize the risks in the space, we explained to them what our position was at the time: it cannot be denied that there is a problem and we must take it seriously.

Just two days before the state of alert was declared in Spain, Ben made a move and decided to call the owners of the premises to put on the table what could happen in the coming days and weeks.

I called Lola and explained that although it was not my intention, I could be forced to close and I wanted to understand if there are options for them to support us financially. Obviously it was a decision that she can not make on that call, but after an hour I received a call from the CEO of the company that owns the premises to tell me that while we were closed by decree we would not pay rent. It was as if a huge weight was lifted from me.

He also contacted the owner of his second space and the response was similar: Ben was only asked to cover the community expenses of the space. Two days later, when the state of alert was declared and the government limited face-to-face work to essential work. The Living Room Coworking closed its doors.

Most of our coworkers obviously still have keys to access the space but TLR staff had to lead by example, so that our recommendation to all our members to work from home would make sense. We canceled all events and started doing them online, from cooking together, to a jam session, to fitness classes, to sharing some beers online. The beautiful thing is that all these initiatives have been started by our family, a huge thanks to our Amani, who is the most active! We also announced that we will pay 50% of the quota for March on the invoice for the month of April.

I could not stop thinking about the fact that despite the current situation there was still a very good atmosphere in the family and that I had to do something to keep it that way and I started thinking about establishing a voluntary quota for April.

The next day the Government of Spain extended the confinement until April 11.

I contacted all the providers and the TLR staff to explain my plan and ask for their opinion on it. Carlos, my community manager told me that we wanted to do it, it couldn’t be done by WhatsApp or by email, that we needed to do it in person, ideally in a conference or a video.

After that everything started to happen very quickly and Ben realized that he had to react similarly quickly because he started to recieve messages from coworkers announcing that they would probably unsubscribe in April.

On Monday of this week, in a video distributed to his community via WhatsApp and sent by email, Ben told them sitting at his table at home about the situation and how TLR was going to face it.

Ben did not want us to share the video because he considers that an internal part of his community but he has allowed us to summarize what they have communicated, what measures they have taken, and how they have explained it to their members.

The response of their community has lived up to the treatment that the space has provided them: there are members paying 100%, 50% or a person who told them that they would pay 40% because they wanted to contribute to covering all of the current expenses and contribute 10% to the welcome back party.

The response of its members 72 hours later is that they have covered 50% of the fixed expenses of TLR next April.

Note: As of April 2nd, TLR has covered 111% of their fixed April expenses. Congratulations!

How are you and your community reacting to the coronavirus pandemic? What precautions are you taking, and how do you see this impacting the coworking industry? We’d love to hear your story! Just reach out to us at communication@cobot.me and we’ll add your response into our next article.