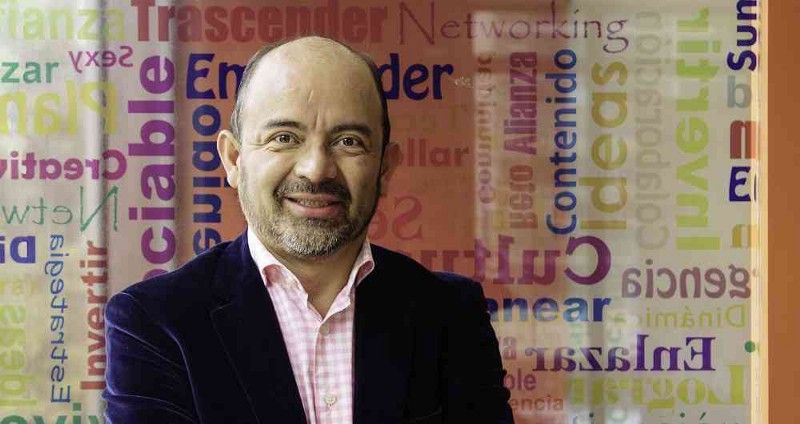 René Rojas is the founder of HubBOG in Bogotá, Colombia. As a serial entrepreneur who’s passionate about technology, he believes that the projects in which he has learned the most are those in which he has failed.

René trained as an industrial engineer specializing in data and process analysis. In 1997, after seven years working in investment banking, he discovered the internet and it changed his life: “I foresaw that it would be the future and I decided that I wanted to start creating internet companies.” After completing an MBA in Australia and training consultants in Europe for several years, he returned to Colombia to start his first project, which was followed by seven more, because, it seems René does not do things halfway.

In 2008 he created HubBOG as community of technology-based entrepreneurs. This community was born from Bogotech, a technological meetup, which today has had 42 meetups in its eleven year history. Two years later in 2010, he opened HubBOG coworking space as we know it today: A 500m2 space where coworking and training live together.”Our focus was to add value to the Bogotech community.” At that time, he tells us, it was revolutionary because the few coworking spaces that existed in Latin America had somewhere between one hundred and two hundred square meters.” Indeed, in 2010 a space that large would have been significant anywhere in the world. Training is a healthy obsession of René’s, who has been a teacher since 1996. “The academy was our differential factor. We offered from three to twelve hours of 100% practical and immediately applicable training: We did not teach theory.”

“After years of operation and negotiating rates we managed to fill the space. The daily events we held were useful, no doubt, but more and more people began to ask us the same question: Do you have a program that will help us grow?” They designed a program around mentors to help projects move forward. At this point they discovered the concept of accelerator: “I was explaining to someone what we do at HubBOG and they replied: you are an accelerator. I asked him what an accelerator does and when it was explained to me, I realized that yes, we are an accelerator.” In those early days of coworking the business models we now take for granted were truly undiscovered territory for most people. However, today “HubBOG’s business model is actually more similar to a campus that has coworking, which means we have a relatively low portion of coworking.”

We couldn’t help asking him why HubBOG hasn’t grown beyond their initial 500m2. “At some point we tried…” he confesses, “…but it didn’t work. However, in the coming months we are expanding to a new space of 2000m2.” The “expansion” is a bit of a misnomer, since they’re not following a normal expansion roadmap. HubBOG found a different way at a structural level to go from to 2000m2 from 500m2 and how to thrive in the current market.

The reality of the market which René refers to as “professionalized” and “highly commoditized” is a market in which there are international flexwork operators such as WeWork or Spaces that will take much of the oxygen in the room for themselves. “A lot of people got into the coworking business because they had a space and thought it was very easy. Now many of them are closing because it is very difficult to compete against professional players and many others who are not professionals.”

For René, coworking is not the focus; it’s just one more piece of his master plan. This could be why he’s avoided an operational problem most other spaces of this size deal with. “We have outsourced the operation of the space.We know how to fill a coworking space, our community and academy draw people in. What we did was contact a third party so that both of us get what we want most: the operators run the space and we will train the next generation of Colombian entrepreneurs.

The HubBOG accelerator functions as an academy in which students pay for 10-week programs, including coworking space training and mentoring.In 2014, he took another step to round out the model: They established a group of angel investors who, according to them, have already invested in 20 projects. These projects offer investment that boosts entrepreneurs’ funding without indebting them if their ventures fail. “It is the most active group in Latin America, and now we are cooperating with the Inter-American Development Bank, creating events for investors in which we curate the projects presented to them, including a series of initiatives to enhance technology-based entrepreneurship. “In five years our objective would be having between 3–5% of startup stocks by creating a venture capital fund that the accelerator startups will be able to access once the pre-investment phase is over.”

It is clear that we can choose between doing everything or doing it well; René has chosen to do it well, and for that he has had to find a partner that complements him. I wonder if this is not the way to go for some managers I’ve known, many of whom have shown signs of fatigue for years and are realizing that what is now known as coworking — although we should call it flexwork — does not make them happy.

The question that nobody has asked René is: Why does he do all this? And the answer is as simple as that for him: “[coworking] is a source of happiness, which allows me to contribute my grain of sand to develop great things for humanity, change destructive growth models and get the benefits not only to revert to shareholders and governments, but for all people. “