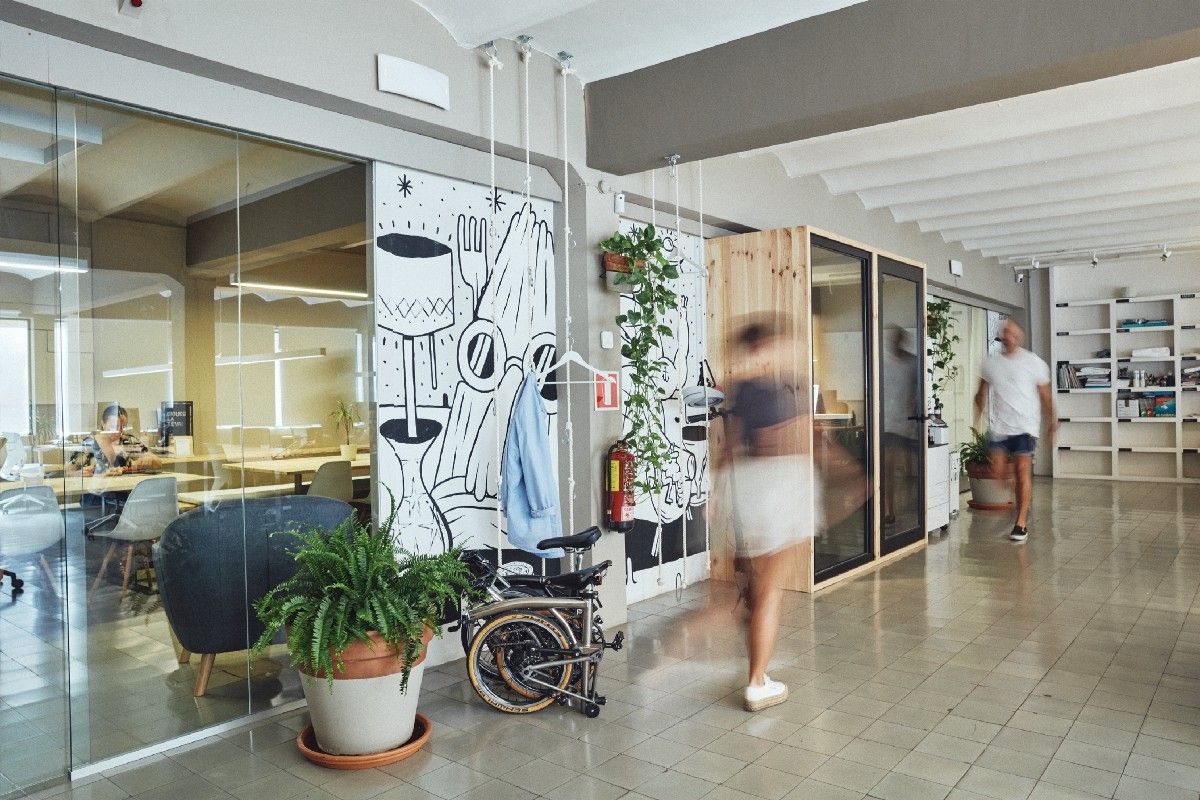 If you have ever visited Barcelona you have surely walked through the streets of Gracia, one of its most well-known (and beloved) neighborhoods. What you may not know is that it has historically been the neighborhood with the highest density of coworking spaces per inhabitant in the world. Right off the bustling Avinguda Diagonal, L’Hort Hub (before L’Hort Coworking) was brought into the world by Arnau Miquel and Josep Armengol in 2014.

Industrial designers by trade, Arnau and Josep moved from working out of another historic space into a shared space.

“It was chaos, nothing worked. There was not even a single roll of toilet paper.”

The company that previously “managed” the space had to cease its activity, presenting Arnau and Josep with the opportunity to take over the management.

The original idea was simple: create a coworking space and combine space management with their design studio. Putting it into practice was not so easy. They quickly realized that they had underestimated the effort that goes into managing a space and the community; in order to cover their bases, they contacted a coworking consultant to help them through the process. In the three years since they’ve managed to double its value, first adjusting to market prices and then making improvements in the space that progressively improved the value even further.

Throughout this process, improvements were not only made in the physical space. One of the things that prompted Arnau and Josep to create a coworking was the idea of creating a co-agency. “L’Hort is not exactly a coworking [space], it is really a hub. Although it is open to any professional profile, the people who get the most out of it are those who have profiles that can collaborate on agency projects with others.” L’Hort, a space of less than 300m2, located in an industrial building full of small studios of designers and other creative professionals just a few meters from the confluence of Passeig de Gracia and Avenida Diagonal, was the perfect environment for this blend of traits.

The concept of a Creative Hub, previously developed by those such a Joana Carvalho from Dinamo 10 or Alejandro Papadopoulos from MOB, is from my point of view much closer to the initial concept of coworking than the current popular style known commonly as flexwork — and at this point, both coexist in in a variety of markets.

But eventually things started to change.

“We saw that it was increasingly difficult for us to close leads [in 2019]. It was not something that changed overnight but we began to notice that we were not able to close leads that in the past who earlier would have swiftly become coworkers. After analyzing the situation we decided to talk to relevant members of the community to get extra feedback from them.“

After analyzing their leads’ behavior, the conclusion was clear: the expectations of the market had risen, people were expecting more and L’Hort’s space itself had lagged behind.” At this point there weren’t many options: “The problem was clear. Nowadays, quality common areas had become associated with coworking and we needed to improve ours. The process started with the idea that we’d improve the kitchen and the entrance. The process ended with a full refurbishment of the entire space except the work area; what we were looking for was to unite common-use spaces in a larger area and move the meeting room to its natural location in a corner.” The result of this was a 33% increase in membership signups and: “for the first time the coworking space had a real waiting list!”

Markets are never static. They may develop slower or faster, but they always evolve. Observing your space objectively and knowing how it moves within the market, whether sinking to the bottom or ascending to the top, is critical to adapt all the time but even more so when everything is changing so quickly.

At this point, Arnau tells us that it would be redundant to talk about sanitary measures taken by the space as everyone has, by now, taken these steps based on their own needs.

“For me personal treatment has been key in this whole process. We prioritized face-to-face conversations instead of sending emails. We always aimed for a direct relationship with each person, catching up on the latest from everyone at least one once a month is essential.”

In the end, it is about humanizing the process, treating people as people. Arnau and so many others have told us to make the process as flexible as possible, or in his words: “flexibility, empathy, being skilled and finding ways to collaborate. Treat each case personally and closely.”

Another input that must be taken into account is the feedback from visits. “Of course you have to be very attentive to the market and the feedback given by potential coworkers. You have to be prepared for everything… Everything changes very quickly and you have to make changes in an agile way, have different scenarios ready but don’t get lost or blocked — that means planning eternally.” Because, as he tells us, “one of the most difficult things about managing a small coworking [space] is to be agile in managing the time we dedicate to each process; this flexibility must not only be applied to coworkers but also to the whole company in terms of time of dedication, schedules, salaries, etc. In summary: humanity, flexibility and the ability to plan without getting bogged down allow us to navigate these waters in the best possible way.”