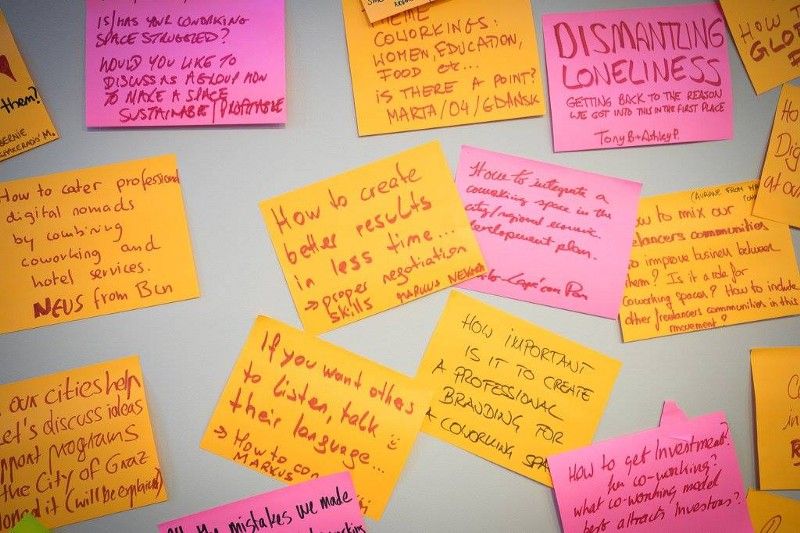 Coworking Europe 2017 was a wonderful event with over 400 attendees from all around the world descending on Dublin to gather for almost a week of coworking talk.

Over the course of three intense days we met coworking leaders, operators, managers, consultants, investors and other talented people involved in the industry. It was also a great chance to catch up with friends and clients over a Guinness or two.

We went with a crew of eight Cobot team members and were all furiously scribbling notes throughout the whole event. It took us some time to process everything but here are some of our top takeaways:

Things to remember when opening a coworking space

Tony’s session provided a good lift for anyone who’s new in coworking or needs to review their business plan. He gave out truly helpful and simple tips for those who don’t know where to start:

Follow those and you have good chances of opening an awesome coworking space!

Coworking in small towns and rural areas was a big deal at the conference last year but it was a bit more niche and overshadowed by the massive trend of big corporates entering the coworking market. Now, as reported by the DeskMag Survey, only 34% of all coworking spaces in Europe are located in a city that has over 1 million inhabitants.

Rural coworking spaces are establishing strong partnerships with their local governments to bring people to their cities, create new jobs and stimulate economic development. Some also partner with local universities and offer support to exchange programs.

Clare Kelly (Glandore) pointed out that the key is to develop a good relationship with your local government body from the start. Just make yourself visible and available to help them and with time they will see that value in what you do and offer support in the long run. Don’t expect much in the beginning and keep in mind that the relationship does not need to involve funding.

Another interesting fact is that members feel more supported in smaller spaces, which are mostly located in rural areas.

Digitizing the Coworking Experience or What is Wrong With Coworking Software?

Madison Hanna and Hector Kolonas organized an unconference session that put together over 30 coworking space operators in a room to openly discuss what they dislike about the available software and what their needs are. It was, of course, one of the highlights for us.

Although we have a good relationship with most of our users and product improvements and suggestions are part of this ongoing conversation, it was very insightful to have an open discussion between other industry experts and space managers who aren’t all Cobot users.

We have loyal users who’ve been with us since the very beginning who have built their whole businesses around Cobot. This doesn’t exactly mean that we always do what our customers have specifically asked for, but it’s important to listen to those that have invested so much trust in our product.

Still, there’s a difference between what people say they want, and what they actually need or will need in the near future. And this is one of the biggest reasons we try to go to as many conferences as we can: to get a deep understanding of how the business is evolving, and to learn about the many ways to do coworking.

This session was a huge motivation to come back and push our product and ourselves to build and create more features that save you time, and allow for better integration with other tools you use.

Why did we get into coworking in the first place?

Last year’s conference was intense. Most of the panels had a focus on corporate & venture funded coworking spaces and the conversation was very polarized. It was good to see that the team around Jean Yves & Vanessa Sans worked hard to address the constructive criticism they’ve received and put together a well-curated conference this year.

Coworking pioneers and GCUC Canada organizers Tony Bacigalupo and Ashley Proctor were present this year and held a number of talks and panels. They played a big role in reinforcing the values of coworking and encouraged the audience to reflect why most of us got into it in the first place.

They emphasized the role that coworking plays in offering a community of trust, even outside of the walls of your space. Dismantling loneliness, supporting independent workers rights, making entrepreneurship more accessible and inclusive — those should be your goals as a coworking space operator, not the daily tasks of renting out desks.

Automating the boring administrative tasks to have more time for members is exactly why we created Cobot, so we couldn’t agree more.

The Elephant in the Room

Unsurprisingly, another topic at Coworking Europe was WeWork. Coworking space operators are slowly coming to grips with the impact large corporates such as WeWork has in the industry — especially on independent spaces.

Jonathan Weinbrenn (Be Offices) addressed this topic and despite our lack of research available on the WeWork model and the fact that it so far hasn’t proven to be a sustainable model, the general consensus among specialists and space operators alike is that the impact is actually much better than expected.

Similarly to reports we’ve heard at Coworking Spain and Encontro Brasil, big players are investing a lot of money into marketing their businesses and spreading out the concept of coworking, which is beneficial to everyone. Ultimately, regardless of whether we think it’s fitting or not, many people wouldn’t have joined or invested in coworking spaces if it weren’t for WeWork.

Bringing Coworking to Other Industries

As such it comes at no surprise that other industries try to incorporate coworking into their offers. At one of the many interesting unconference sessions, we heard a first hand account how such a project, (The Nest) was implemented in a hotel by coworking consultants Tiffany Mark and Mike LaRosa. The audience learned how the team balanced the interests of five different stakeholders who did not necessarily have the same goals. One highlight of the session that triggered laughter from the audience was the story of the custom build furniture with wheels — which were not allowed to be moved at first. This was a good example of the gap the coworking industry has to close as a holistic solution for the future of work(places) and the highly specialized and segmented professions that are the end product of the industry age.

One example is how operational work is distributed. Coworking spaces have community managers — an industry specific role which entails many different tasks that involve daily administrative operations as well as active engagement with the people and projects of a space. Hotels on the other hand, have a number of disperse roles controlled by a general manager. In the end, both models have the same goal — to take care of people. However, while the coworking model might seem chaotic in comparison the hotel industry, having a centralized organizational structure can leave blind spots that are fundamental to run a successful coworking space.

Our main takeaway from that session is that building these bridges by understanding the perspective of the classic office/hospitality industry is key to successfully bring coworking to more people in the world.

This year’s Coworking Europe really took the coworking conversation forward and the content was relevant to both experts and newbies. Thanks to all those involved in organizing the event, and to the attendees who made it even better.

We are looking forward to participating again next year — and hopefully we’ll see some familiar faces sooner in CU Asia!