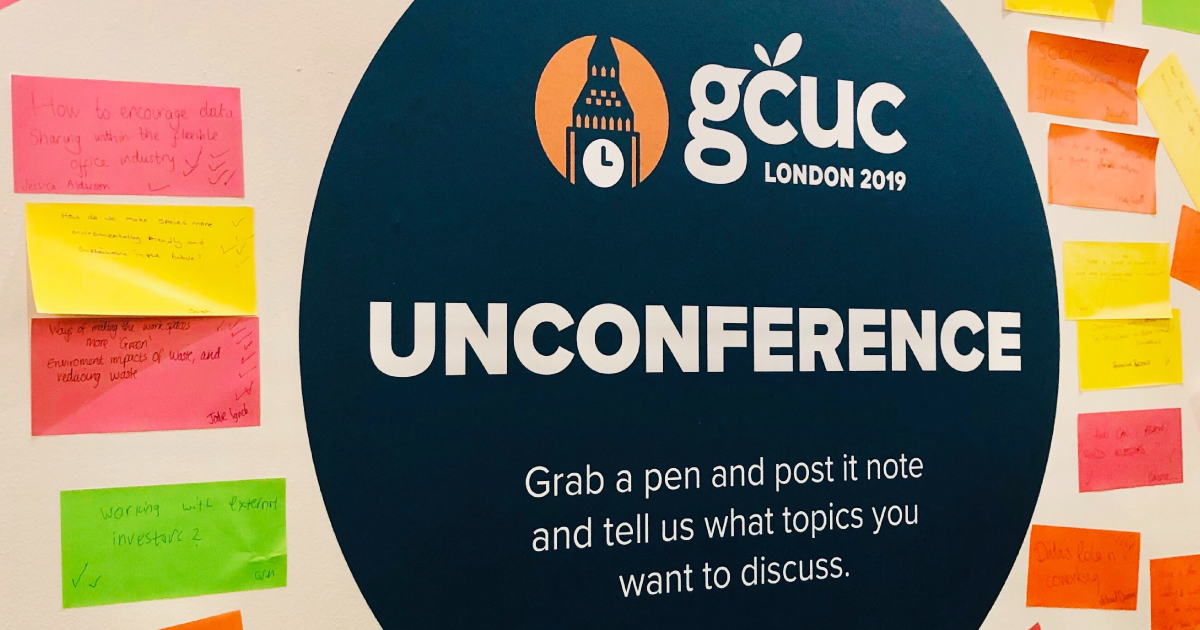 GCUC UK 2019: Coworking, Flex Work, And Why They Matter

At GCUC UK 2019 in London, the past, present, and future of coworking all competed for our attention from September 23rd-24th. It may have been a brief few days, but both were jam-packed with content and a chance to see how coworking and flex work are reshaping one of the most prominent metropolises on the planet. So what’d we learn this year in London?

The awkward teenage years of coworking are over. The industry has settled on a clearer set of definitions and by now most people will know what you mean when you talk about coworking or flexible workspaces:

Despite this delineation, coworking and flexible workspaces continue to have large overlaps in service — with their difference expressed primarily in attitude, values, and in the people who work out of them.

Clearer definitions also hide the fact that many spaces are a mixture of both (in the UK 7% of spaces self define as a hybrid). So while a coworking space might set itself up as a totally different thing than a flex work space, they share enough DNA to easily blend several different types of “New Work.”

Coworking space profitability hasn’t changed dramatically over the past few years, according to the DeskMag coworking survey. Of participating spaces, 43% are profitable; one third break even; and one in every four coworking spaces are in the red.

However, these numbers hide the real story behind many of these “unprofitables”: Many coworking spaces don’t aim to make a profit. Aside from non-profit organisations (12%), coworking spaces are often subsidised or covered by another business. Think corporations that offer an in-house open-plan coworking area as a perk to their employees, or a small company that uses public coworking to subsidize the cost of their space.

If you’re wondering which traits are most likely to be associated with profit, there are a few indicators. Roughly 90% of coworking spaces that generate a profit have been operating for longer than one year and have more than 200 members. Part of this is selection bias: If the space wasn’t making a profit, it probably wouldn’t have survived the first year. But it also speaks to the longevity of spaces that can survive that first difficult year.

Space optimization has given way to human-centric design. Things like positive communication, health and wellness, mental health, and productivity. The new name of the game is finding ways to maximise interaction and human performance.

So what were the ideas thrown around at GCUC UK? Prioritize technology that meets the needs of the community. It may sound obvious, but the demographics and programming of each space define the technology needed, which in turn will attract more people who are seeking what you offer. So if you’re looking for a way to increase maximization, why not try talking to some of your members and seeing what they would want?

If you’re struggling to come up with ideas, here’s quick primer on tech that can make a difference.

Landlords and operators haven’t given up their interest in collecting troves of data on space occupancy, flow, and member productivity — but collecting and measuring that data is tricky. For example, it’s very hard to track the time a member spends in the space. Even with comprehensive wifi or door access integrations, multiple devices, cigarette breaks, privacy concerns, and security exit plans make it near-impossible to get truly accurate data.

A WeWork sales representative in attendance offered insight into their use of floor sensors to track occupancy, especially with larger teams and companies. They did not, however, answer when asked who owns that data.

Trends and Things to Watch

We don’t want to end without talking about one of the best parts of our time in London. We attended an event on remote work with Brittnee Bond organized together with the London Coworking Assembly at Impact Hub Islington. As with most of our conference experiences, the best times are when you’re meeting, reconnecting, and generally enjoying the company of other coworking professionals. We’re looking forward to seeing you at next year’s GCUC UK (and probably a few times before then too!).