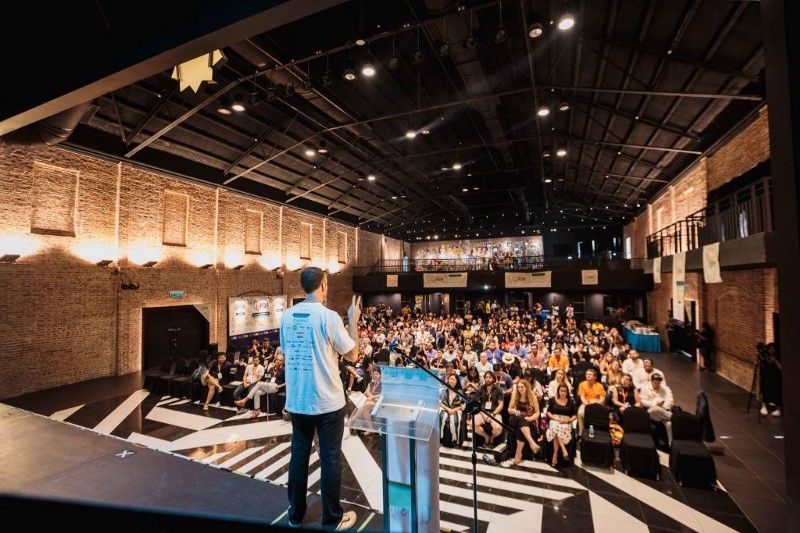 From February 20 to 24 the Coworking Unconference Asia (CU Asia) will be taking place in Goa, India, and the Cobot team is eagerly anticipating attending the fifth year of this event to share and learn from the exciting and diverse Asian coworking scene.

“We had no idea what we were doing and we wanted to connect with other people and figure it out together.” The first CU Asia was held in January 2015, the original idea was to create an Indonesia-focused event, but at that time there were only a few spaces in the whole country, and they were separated by the vast geographical size of Indonesia.

At some point, he decided that: “If we are going to have a party let’s have a proper party.” Thus, CU Asia was born. One hundred and ten people showed up for the inaugural event. Everyone knows that coworking managers create and foster a community in their own spaces; they nurture them and help them grow. “But what about us? What about the community builders? Where do we go to recharge? Where do we find our people? How can we get inspired? Connect with others, bang our heads against the wall, ask questions, and be challenged in a healthy community of like-minded people.” These are the people who run and attend CU Asia today.

Steve was kind enough to share some of his takeaways from the previous years.

The first one was related to the conference location. Have you ever wondered why CU Asia has never been in a country capital, or even a major city? It’s an important topic because where you are located will shape the entire experience. “It’s like a magical journey we make together. If we hold the conference in Bangkok there will be attendees in the middle of their work day, they’ll be coming in and out, and that won’t create a cohesive experience. This is why for our third year we chose Chiang Mai.” Obviously, he adds, “We try to pick places which by themselves are awesome, although I have to say that creating this magic makes things harder.”

On the other hand, Steve thinks about the way coworking has evolved during these years. “Coworking is getting harder. Three years ago you were competing with coffee shops but that is changing. Now, coworking is faster, bigger, and much more competitive. It’s much more driven by market forces and real estate and is becoming more difficult for smaller operators. But that’s not necessarily a bad thing.”

CU Asia is evolving with the sector and has made changes to stay in touch with modern expectations. They know that they attract mostly independent community-oriented operators, but make sure to work with organizations of all sizes, this year they’ve partnered with India’s largest coworking operator 91Springboard. Despite their size, they are known for their community-focused programs and nature.

And this is why this year’s theme is the challenges of growth. CU Asia is focused on helping people to make good business decisions and provide them with tools to be economically sustainable, as community-oriented spaces can sometimes struggle on the business side of their operation.

“While organizing this conference someone said me: coworking has become a fundraising race.” According to Steve, this is true in the biggest cities where prices are out of control. “You can’t do it without the support of lots of money. It’s less fun, you must follow the line, and there’s less room for experimentation. We have reached a point in a lot of places were the phrase ‘scale or die’ is reality: we already reached this point and doing this small thing here and experiment for three years is almost not possible anymore.”

On the other hand, Steve is sure that coliving makes more sense in this region that in maybe any other regions of the world. So we can expect hospitality operators, like hotel chains, will come to the region and give visibility to this business which fuses travel and work.

What makes CU Asia different? “CU Asia is smaller by intention. We intentionally kept it to 250–350 people and it’s a longer event. We do that to make stronger connections. Together with remote locations, spontaneity, fun, and adding unexpected elements like a dragon when people are expecting a keynote, these serve to make it a bit more playful.”

Despite these changes, the core structure hasn’t changed much. “I would say it’s a little less commercial, a little bit less formal and we don’t tend to have sponsors speaking, I know it’s a bit unusual, while there’s nothing wrong with sponsors speaking we prefer not to do it. I don’t like that a participant who comes to the conference may feel that he or she is hearing paid content, especially if they paid a lot for the ticket, flights, and accommodation.” Instead he works with the sponsors to connect them with people at the conference who would be interested in their service. After all, that’s the ultimate goal of any sponsor: to attend a conference where people are interested in talking to them.

We asked Steve why the CU Asia was so many people’s favorite conference.

“Well, first of all, you have the Asian coworking market itself: It’s a younger market full of energy and ingenuity and has that Asian amazing speed. And it’s truly very diverse. On the other hand, you have a mix of a lot of things you already said to me. As an attendee and as a conference organizer myself I have to say that when you are attending a conference you notice if the people behind it really care about what they are doing. In the case of CU Asia, you can feel the attendees’ experience is in the middle of everything, it is the main concern.”

We asked Steve what he would tell someone from Europe or in the US who’s interested, but not sure they should attend.

It’s an easy question for him. “It’s important to get outside from your head, it’s important to leave your area where you know what’s going to be said because it’s so familiar. You may know a lot about coworking but it’s important to see it from a different perspective. It’s the same reply as to why you will be much more effective thinking in Bali than in Barcelona: To get perspective on your own life you need to step out of it.”

Then with a big smile, he reminds me of the bracelet he gave me at the Coworking Europe Conference 2014 in Lisbon with a label that reads: ‘Winter sucks, come to Bali.’ And reminds us that summer is also an asset in February. “A mid-winter break with a lot of coworking enthusiasts in a carefully chosen location helps.” But he adds, and this is very important to understand the way in which CU Asia is organized: “We take care of the whole experience. We are responsible for your experience for this whole period of time in a way other conferences organizers I know are not. We think not only inside the conference but outside it, we craft everything and ask ourselves: are we making sure that nobody feels left out?”

My last question is always the trickiest one: What has nobody asked you about coworking?

“What’s a big threat to coworking?“

According to him, there are a few. “The German Federation of Coworking Spaces is a vocal group in Coworking Europe and there’s always talk about ‘real coworking.’ I totally understand there’s a frustration when other companies appropriate terminology, especially these giant operators. For example in Bali right now there are 30 coworking spaces, some of them are legitimate operators and some of them are rooms in the back of a hotel. There’s this existential threat that coworking, as a term, is abused and diluted to the point where it becomes a worthless term.”

He confesses that this situation “makes all of our work a bit harder and I guess my concern is: how do we support the people, who we know have the right heart and the right motivation, to be commercially successful? How do we ensure that independent spaces that made coworking so attractive to so many people continue to exist?”