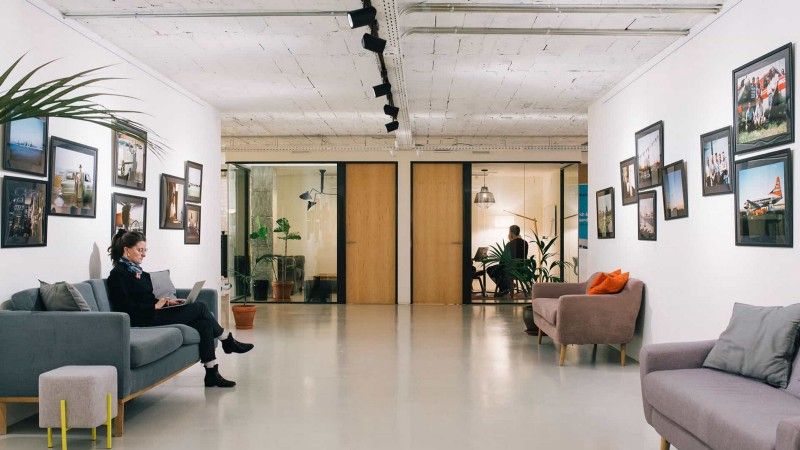 There are few coworking managers who, after achieving what Sergi Tarragona has by 29, maintain their low profile and remain as humble as the day they started the project.

So how did Sergi come into contact with coworking? “While I was working for Airbnb I got to know the world of coworking at CREC Coworking (Barcelona) and decided to create a small coworking space to test the market.” Around 2015–2016, he explains, there were many spaces in Barcelona but they were focused on freelancers; what he had in mind was to create a hybrid space between corporate and freelance. “We were pioneers in finding this balance between corporate, the closed office, and coworking. We applied elements of industrial decoration but refined so that companies could tolerate them, plus a terrace to generate a strong focal point for the community. From there we grew up in the same building and in other locations in Barcelona.” Cloudworks today has six spaces in Barcelona and one in Madrid for a total of 13.000 m2.

Behind this story, that Sergi insists is not extraordinary, is the first leap in Spain’s coworking evolution (something I have talked about on different occasions previously). Until that point we evolved from commercial premises generally smaller than 300m2 to commercial spaces of around 1000m2, primarily centered in Madrid and Barcelona and later Valencia. Sergi was the first person who saw beyond, the first person who understood that in order to attract conventional companies a different space was needed and he thought to find a space with lots of light in an attic. He understood that accessibility to the street was not as important as access to the outside. What would you pick between quick access to the street where you can find a bar to have a coffee or a private terrace in an attic with views? He saw it, the rest — myself included — didn’t.

Where did this idea come from? “I had to look for international references because in Spain, at that time, nothing similar existed.” Obviously he knew WeWork and knew very well how it worked: “It was a long way off, and I didn’t think or pretend to be a competitor to WeWork… What I knew is that WeWork had entire buildings full of people where it offered many more services and amenities than anything we knew in coworking.”

“What I tried was, in a very cheap and very simple way, to get closer to that than to anything that exists.” There is an important point that Sergi wants to highlight: “For me this had to be, from the beginning, a business. I was working at a fintech startup and coworking was a side project.” After a year Sergi left, I imagine much faster than he ever imagined, his position in the startup to dedicate himself exclusively to something that was destined to be much more than a side project. Sergi’s reflection is very clear “I always looked at this from a business and numbers perspective.”

Does space matter? His answer could not be clearer: “I tant.” Which, translated into English, (the interview was conducted in Catalan which is the language in which Sergi and I usually speak) would be “of course.” Immediately afterwards he adds: “In the end it is the base of our service; without a good space it is more complicated to have a good service, but it is not impossible.”

Space is essential if we want to have a more corporate audience. Having an adequate space, with good finishes and furniture, pleasant, of high quality that catches the eye is essential for them. Obviously Sergi’s humble attitude will make him not tell you, but Cloudworks raised the level of the services it offered and captured groups that others not been able to draw in, and this opened a category in Spain that would take a leap again (this time a quantum leap) with the entry of WeWork into the Spanish market in mid-2017.

Should we work to grab this segment of the market?

Obviously it is a business approach choice, which will affect the project globally. We cannot pretend to get this type of audience with just a coat of paint, we must decide if we want to have a product that meets their expectations in design, space, and services. What is the reward? A target audience that is less sensitive to price (relative to the traditional coworking demographics) but it will obviously require more investment. The community that will be generated will be different, but, obviously, all decisions have their trade-offs.

Cloudworks has spaces in Barcelona and Madrid, where there is no shortage of corporate clients, but we were curious to know what differences there are between these cities and if they have any adventure planned outside these two cities. “Both markets are very interesting; the market is probably bigger in Madrid, but they are two different beasts. Madrid is closer to exclusively focused on corporate clients and there is a lot to offer. In Barcelona there is also a lot of offer but there is more movement, there are more leads, there is more potential non-corporate client — the target is different. In Madrid, obviously there is everything but you have a more institutional corporate target that does not exist in Barcelona, and the target ranges from small to medium-sized companies to a smaller-scale corporate one. We are not currently contemplatingexpanding outside of Barcelona or Madrid. However, in the same way that we do not have investors demand certain levels of growth in these cities, we have the flexibility to grow anywhere.” That is to say, Cloudworks has enough flexibility to develop a project if a good opportunity arises.

I asked Sergi what advice would he give to an operator who wants to evolve his model to be able to focus on this type of client. “There are many points that would be unfeasible for the smallest spaces, but at a basic level, put yourself in the shoes of the consumer. Put yourself in the shoes of a person who has a team of 4, 6 or 50 people and make a list of what they will want at both a service and community level. So when the lead arrives, or when you find one: you can go for it.”