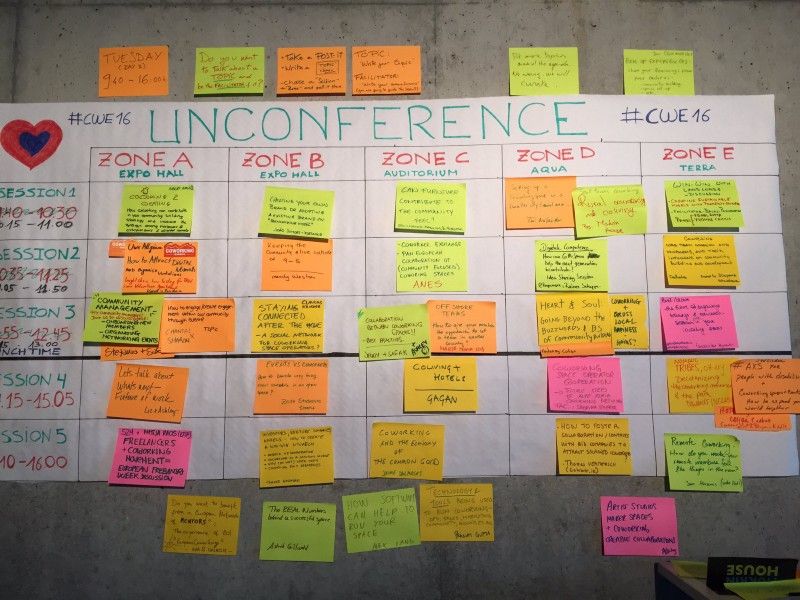 A few weeks ago our team went to Brussels for the 7th Coworking Europe Conference and we came back with many things to share with you.

The conference traditionally started off with the Coworking Survey presentation from Deskmag, which included several insights that set the base and tone for the presentations that followed, as well as the more informal conversations during the week.

One of the biggest statements released by the survey is that 79% of coworking spaces consider themselves to be more than just coworking spaces. We believe — and many of you would probably agree — that the ‘more’ is all about the people in the community and finding ways to foster it.

As the keynotes presentations and other panels continued, a certain tension built up between the pioneers of the coworking movement and the newbies from the corporate world.

Speakers from large business centres to luxury work hotels with questionable cultural references weren’t perceived well by some of the audience who argued that such projects have little or nothing to do with coworking.

The divide was even more explicit when some of the speakers mentioned having budgets of over several billion dollars — directly after a survey showing that 60% of coworking spaces still can’t make ends meet.

Other presentations that followed were certainly more popular. Molengeek, a local project in a marginalized area in Brussels, provides free coworking space and educational programs for the local young population from the neighbourhood of Molenbeek. And for a more global perspective, Varun Chawla from 91Springboard gave a very insightful presentation on their journey from being one of the first coworking spaces in India, and how they became a very successful multi-location business. This was a great example of an informative presentation, which highlighted assuring both profitability and growth for a space — but also sustainably.

There was also a big presence of people from the hospitality industry, which reflects the growth of workation and coliving spaces. Panels and discussions on the topics of coworking spaces in rural areas and tourist destinations were by far the most attended throughout the conference.

On the second day, Cobot held two unconferences sessions. For the first, we teamed up with Benjamin Riddle from Coliga and Jeannine van der Linden from De Kamers and Open Coworking to talk about diversity in coworking spaces. During our session, titled “Nomads, tribes, oh my… Decolonising the coworking movement and the path towards inclusion” we discussed assumptions and behaviours that lead to exclusion of certain groups of people and ways to make coworking spaces more inclusive and welcoming.

The second session was held in the main auditorium and one of our co-founders, Alex, participated in an open panel about coworking software together with the team from Nexudus and Ryan Chatterton from Coworking Insights. We talked about understanding the needs of your space to choose the right tools and the role a software plays in helping you run your space.

Ultimately, it was a very stimulating week. As much as the controversial talks weren’t well received at first, they did raise very interesting debates ‘outside of the conference’ (paraphrasing Fernando Mendes from Coworklisboa) about what coworking actually is, the roots of the movement and its many possible future becomings.

As a company that provides software for hundreds of spaces all around the globe, we know there are infinite models of coworking out there and it might be hard to try and fit them under the same umbrella. But we must always keep the dialogue open, engage, be critical, look at what needs to be improved and remember that coworking is not only about the spaces, the number of square meters, the decor or even the tools, but mostly about the people in it.

And while there might be a miss- or overuse of the word ‘coworking’, we can only hope that this means that our movement is inspiring to more traditional models of working and the corporate industry - and that they are looking up to us, rather than the other way around.

Thanks to our old and new friends from Copass, OuiShare, Bisner, Coliga, Coworklisboa, Open Coworking and many others from Coworking Europe 2016 for the discussions and conversations which inspired this post.

We hope to see you all soon in Chiang Mai for the CU Asia!

Until then, Happy Coworking.