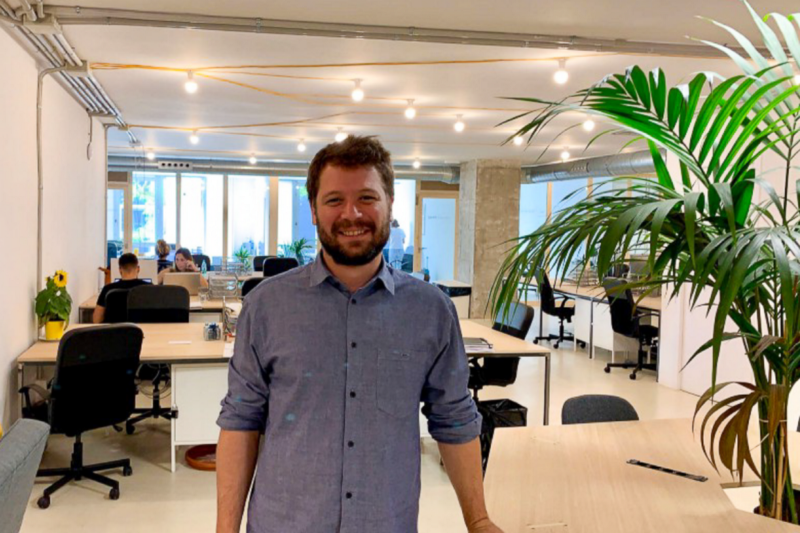 When you meet Alejandro Papadopoulos, CEO and Co-founder of MOB, your first impression of him is far from what you’d imagine a lawyer to be like. Alejandro took over from Cecilia Tham at the head of MOB a few years ago and combines his work as the head of the MOB team with his Kube Legal Services startup, as well as other projects carried out within the MOB environment.

In a bold move, MOB became the first coworking space in Barcelona to open a second location. The opening caught many of us (including myself) by surprise. Even then, their focus was primarily on being a creative hub, not on their coworking service. A little over two months ago, MOB opened its third location next to Mercat de Santa Caterina, one of the the most competitive areas of the city. It’s an area that I’ve defined as the most important coworking cluster in the city of Barcelona.

I visited MOB Caterina in person and saw the physical expression of Alejandro’s philosophy of growth. “In 2018 I had many doubts seeing the exponential growth that some other coworking brands were having, but I ultimately realized that it wasn’t what we wanted for ourselves. At MOB we are focused on meaningful projects and we haven’t focused on growing our coworking since we created MOB Pau in 2015.”

In the depths of 2018, he confesses that MOB’s growth presented what seemed like an intractable challenge, and he sought to redefine their core message: “We wanted growth that was not dictated by the real estate sector. We want to keep the prices of the new location to match our previous ones and ensure that the expansion project had consistency.”

I asked Alejandro what he meant by “working on projects.”

“Since our inception, MOB has sought to work and develop projects jointly with our community. We have always considered ourselves a creative space with a multidisciplinary community. Fundamentally, what we do is look for clients and assemble ad hoc teams with profiles we think are most suitable for the execution and development of that project.Therefore, MOB manages a talent pool of more than 400 people with the aim of achieving greater accomplishments by working together, generating a benefit both for the community that occupies our spaces and for ourselves. This model keeps us away from the real estate business of coworking spaces.”

We were curious to know Alejandro’s point of view about the evolution of coworking in Barcelona.

“From 2012 to 2015, the hard work was making people aware of a new way of working, collaborating, and sharing. The idea was to join forces to become more efficient and strong in a market shaped by the crisis that hit Spain — and the whole world — at that time. It was hard work, and back then we were fighting for a small portion of the market. We were working simply to put us on the map as a reference. We made a great effort at that time get large companies to place their innovation departments in our space.”

When MOB opened its second space, things started moving faster. “After opening MOB Pau the market was changing by leaps and bounds. By 2017 we had hundreds of players in the scene, including multinationals, which forced us to adapt in how we treated the space itself. During this period, MOB made a greater effort to differentiate itself by becoming an open innovation platform, giving its members the opportunity to participate in large projects jointly with us.”

And then came 2019. “With the opening of MOB Caterina, we have discovered that the market is now stabilized, in fact there is a great demand in the sector, and much to our surprise, we filled almost the entire space before even opening it. The entire sector has grown to accommodate small, medium, and large corporate entities as well as independents.

How do you see coworking in 2020? “It’s uncertain. I think we talk about the constant pressure and changing world of work. We all hear that the demand is not going to stop growing, but the truth is that we do not have an accurate model. There is an understanding that we have two businesses: space and projects. I think there is a real fear of a market collapse, especially if office rentals continue to rise. What I do ask myself? If there is an oversupply, will those who are opening spaces at current prices have room for error in the future? Especially if they’re forced to lower their prices and do not have additional services generating income, as we’ve tried to do since the beginning?”

Alejandro’s question is aligned with my doubts and those of other people in the sector who think that a contraction of the economy over the next four years will cause problems for market operators who have based their business plan on current market rates. If we take into account what happened in the last economic crisis, the availability rate of offices, now at 4.5%, will rise, and prices will fall. This hypothetical situation can be a problem for spaces that pay rents. This position will leave them little room to maneuver if things get more difficult.

Alejandro skipped — with great elegance — our last question so we are going to try something new: we want to hear what questions you think Alejandro has never been asked, and we’ll ask him! Add your question to Alejandro Papadopoulos in the comments below and we’ll get his response. Let’s see what you can come up with!