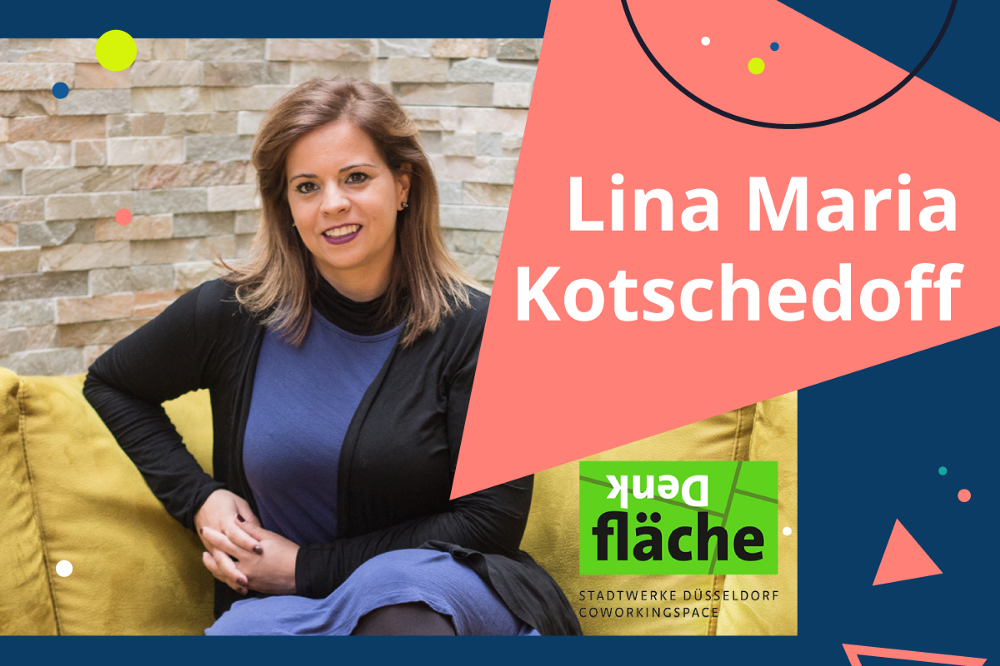 Lina Maria Kotschedoff is Community & Start Up Manager at Stadtwerke Düsseldorf AG in Düsseldorf. Her main task is the hosting, managing, and further development of the Denkfläche, the coworking space of Stadtwerke Düsseldorf AG. Since 2017 she has developed their coworking business model and launched their first space in August 2018. The Denkfläche Community consist of start-ups, freelancers, and temporary teams of corporates.

Thanks for taking the time to talk with us. Can you tell us a bit about your role at Stadtwerk Düsseldorf?

My role is 80% Community Manager and 20% Startup Manager.

The 80% is all things coworking; everything from opening the windows in the morning (absolutely essential and great for making sure the environment is welcoming), to coaching members of the space and connecting them with one another, to more or less everything related to marketing.

I built the entire model of coworking for Stadtwerk Düsseldorf, which is great because it affords me a great deal of freedom at an organization that is typically much more traditional in its methods.

The other 20% of my job, Startup Manager, is supporting the community; both in Düsseldorf and in the Rhine Valley. The Rhine Valley is the term used to describe the area in which Düsseldorf is located, a region densely packed with cities including Cologne, Bonn, Essen, and more. Here, strictly following the borders of one city to the next don’t make much sense, we work together with startups from across the region to support our mutual development.

I mentor startups, they’ll usually come to me and ask for the support. When I pre-screen them, it’s less like a traditional VC screening and more of a preliminary conversation to see what they’re doing and how they’re operating, and to see whether they will be a good fit with the Stadtwerk Düsseldorf ecosystem.

How do you approach the role of community manager and what does it mean in your space?

When I started in summer 2017, I didn’t know the world of coworking existed. By the end of 2017, we had 9 spaces with a rough total of 13.000 m². Now, we have 23 spaces at 34.000 m². This is all to say that coworking is growing very fast in our city. It’s a diverse group of spaces that fit lots of needs. For example, Startplatz is great for a startups in the ideation phase, mostly young people (though not exclusively!). The amenities are scarce and the space isn’t cozy, but you are operating with mentoring and alongside other startups and organizations who are moving fast and need plenty of room to grow.

On the other hand there are spaces like the Design Offices, a much cooler way to do designed offices where it’s style-forward and incorporates modern office trends.

Right now we don’t have any big players like WeWork in Düsseldorf. They do have one location in Cologne, and rumor has it they’re looking into Düsseldorf, but right now it’s all small players and a diverse range of everything between the two examples I just mentioned. We focus on collaboration and the motto “get your work done.”

How do you think coworking has changed in Düsseldorf over the past few years, and where do you think it is going?

At my home space, the average age is around 35–40. It’s a more mature scene that focuses on people who want a higher level of stability. Sometimes startups will ask about joining and I suggest they check check out some other spaces I recommend, because it will do them more good to find a proper fit — you don’t want to plant seeds in the fields too early.

In my personal opinion, a lot of the early spaces were driven by hipsters who wanted an excuse to drink a beer at 2pm on a Wednesday. That was off-putting to many of the professionals who are now coming into the coworking world. They feel lost, but that feeling has driven a lot of the new growth that we’re seeing.

We ran into you in Mannheim at the Coworking Konferenz & Barcamp 2019. What were your favorite sessions/lessons from the conference?

The most useful one for me was the law and legal issues session: there were two lawyers from Berlin who went over the common traps related to contracts in coworking. For example, it’s so important to understand whether your contract talks about space rental or being a service, and what words you should put in your Code of Conduct for legal coverage. It was everything that my lawyers didn’t know the answers to. In the past, they’d write up a standard rental contract, but wouldn’t know the things I needed to protect myself from liability for coworking as it carries it’s own challenges and particular legal issues.

The diversity session was inspiring as well, it’s an issue that we take an active role in in our community and it was useful to hear from others working to build more diverse communities in their own spaces.

Do you have any advice for community managers who might be just starting out in the role?

The most important advice I can give: never assume what your coworker needs.

Coworking is a service, not just a space. My competitive advantage is that I used to work for a trade show, and I was in the world of service people working for clients. Even once you’ve defined who your target audience is, figured out what your space does well, and brought in the coworkers, you can’t make assumptions about them. Always ask smart questions to figure out what they’re trying to tell you.

Thanks again for your time! How can people connect with Stadtwerk Düsseldorf online?